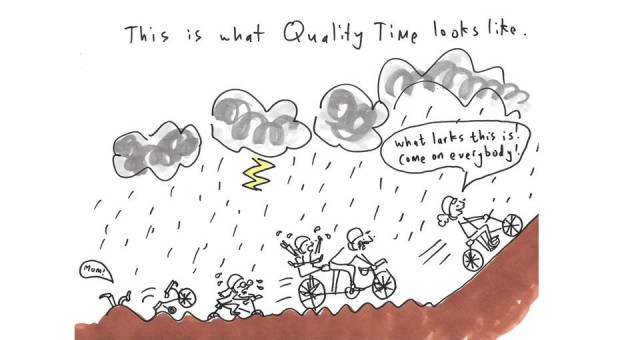 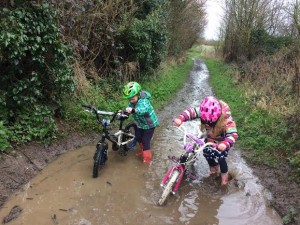 Easter Sunday dawned grey, cold and wet – the sort of weather for staying at the fireside, playing board games in your velour lounge suit .

But where I come from, you just can’t enjoy that level of comfort unless you’ve really earned it. Preferably in the fresh air.

Cue a quick consultation of the Child Friendly Cycle Ride Handbook. A grueling 9 mile stretch of Dual Carriageway and open country was selected as the obvious choice.

As we were unloading the bikes from the car, the youngest member of the party was violently sick on the cagoules which were piled up under her feet but we set off undaunted in a hailstorm, confident that the lashing rain would soon rinse everything clean.

Surprisingly, the route started on a particularly busy stretch of the A4 where 2 lanes of traffic hammer along at an average speed of 60mph.  All competent cyclists know the joys of freewheeling in the slipstream of an Eddie Stobart lorry, but oddly the children couldn’t get the hang of this at all.

The terrain finally changed to quiet country lanes but for some unfathomable reason, the Map Reader led the party off-piste by way of an impassable bridle circuit two feet-deep in mud and ooze.  The 7 year old was soon complaining “this is the worstest day of my life” and the parents were making a mental note to add 5 miles to the journey “to give her a bit of backbone”.  There followed an interesting couple of hours walking our bikes along impenetrable brambly paths  before pedalling furiously along Berkshire’s busiest highways. We arrived at the very wonderful pub, The Beehive in White Waltham, with nerves shot entirely to pieces before re-emerging thirty minutes later in glorious sunshine for the final leg. 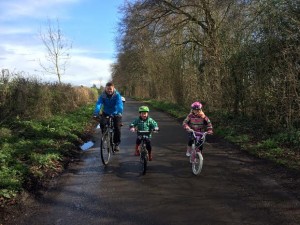 Shown here in more positive spirits after a quick round of Jagermeisters at The Beehive in White Waltham.